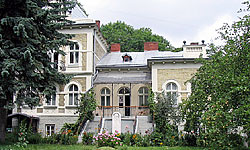 State Memorial Museum of Mykhaylo Hrushevsky in Lviv city got the independent state museum status in May 1, 1998. Solemn unveiling happened before the Independence Day — in August 22, 2000. It is located in the villa, where a worldwide known historian, scientist-analyst, statesman and politician, head of the Ukrainian Central Council, the first president of the Ukrainian National Council — Mykhaylo Hrushevsky lived during 1902-1914 years together with his family.

In 6 expositional halls almost all stages of the famous historian's life and his enormous work are exposed. A special emphasis is made on the Lviv period of M. Hrushevsky's work (1894-1914 years), when his great scientific talent was fully disclosed as the talent of a scientist, analyst, the head of the Ukrainian scientific institutions and editions (Scientific society of T. Shevchenko, Literary-Scientific Bulletin, STS Memoirs, Ukrainian-Rus Publishing Society etc.), historian-researcher, specialist in literature, Lviv University professor, an author of the fundamental scientific works: The History of Ukraine-Rus (10 volumes), The History of Ukrainian Literature (5 volumes), thorough researches of Ukrainian history, literature, ethnography, folklore, sociology etc., all his works got an appreciation by the scientists in the whole world.

For Mykhaylo Hrushevsky Museum, the museum's design plays the important role: the whole exposition is built in memorial interiors. The first expositional room is the input hall, it shows up Mykhaylo Hrushevsky as a historian (his works of history are presented there) and as a politician (UNC materials, Central Council, decrees). The next hall (former dining room) exposes the materials about STS, Hrushevskys' family private things (wardrobe, kitchen utensils), evidences about friendly relations with the Frankos family. Further there is the Hutsul room, designed by M. Hrushevsky. To his order, Hutsul master — Shkriblyak, created the dresser. The stove, created by I. Levytsky was also saved. The next exposition tells about the Central Council period and M. Hrushevsky's staying abroad. There is also the nook of Kholmshchyna — a small fatherland of the historian. There is a separate room of M. Hrushevsky's daughter (Katherine), she was a culture scientist, a sociologist, an ethnographer, a folklore scientist. The excursion is finished at the study room. Several M. Hrushevsky's private books were preserved. Formerly, there was a big library.

This museum is a modern historical and cultural building with a rich collection of relics, with a modern scientific method of their presentation. The first Ukrainian president — Mykhaylo Hrushevsky's exposition of the memorial museum is a synthesis of scientific researches in the science about Hrushevsky branch and museum collection, about the best museum expositions creating experience. Besides, the chain of repairing and renovating works was held there to renew M. Hrushevsky's house, his villa, in particular, inside interiors of the house.

The participants of the sixth summit, which happened in 1999 in Lviv city, nine Presidents of the Central and Eastern Europe initiated the presidental garden on the memorial territory of the museum.