It is located in the Northwest of Zakarpattia Oblast in the territory of Polonynskyi mountain range and borders on Slovakia and Poland. The highest peak is Mount Polonyna Runa (1479 m). The Uzh River (the Danube Basin) and its tributaries Liuta, Ulychanka and Ublianka flow through this territory. 48% of the territory is occupied by National Park "Uzhansky" that belongs to East Carpathian Biosphere Reserve. The district belongs to the most environmentally friendly ones — there aren't any dangerous industrial enterprises here. The terrain is rich in woods, including beech virgin forests, as well as in mineral springs as "Naftusia", "Narzan", "Yessentuki". Near the village of Knyahynya, there are karst caves, and also the impact site of the biggest meteorite in Europe (1866 ), it has been called Kniahynia meteorite. Its debris can be seen in the Regional Museum of local lore as well as in the museums of Vienna and Moscow.

The territory of Velykyi Bereznyi district was populated even in the 1st millennium BC that is proved by archaeological remains, in particular some ware made of bronze and a burial place. First written historical accounts about Velykyi Bereznyi date back to 1427. In the 1427 state tax list, there is information that Velykyi Bereznyi belongs to Uzhhorod domination of Counts Druhety. The villages of Lyuta, Maly Berezny, Volosyanka, Stavne, Stuzhytsia and Chornoholova can be considered the same ancient (according to written accounts).

Velykyi Bereznyi district is a place of compact residence of Lemkos — an ethnic group of Ukrainians. In the villages of Stavne, Chornoholova and Lyuta, there are folk ensembles that often represent Lemko culture at the festivals and festive events. Masters of folk crafts such as carver-incrustator Petro Kurtanych, weaver Maria Rohach, embroideress Maria Zavadska, wheel maker Ivan Tsyfra and others preserved the best traditions of folk crafts of Uzhanska Dolyna to date.

After the annexation of Transcarpathia as an autonomous member to the Czechoslovak Republic in 1919, two young artists Yosyp Bokshai and Adalbert Erdeli decided that Transcarpathian artists could also take advantage of this privilege (autonomy). An art school was founded, famous as "Transcarpathian Barbizon" — it takes its name from a small French village where such realist painters as Russo, Coro and Millet lived and worked. Zhornava, a picturesque mountain village in Velykyi Bereznyi district, became the centre of Transcarpathian Barbizon. Yosyp Bokshai and Emil Hrabovsky painted in the manner of realist painters and late impressionists; Adalbert Erdeli, Fedir Manailo, Ernest Kontratovych, Andriy Kotska and others painted in the manner of expressionists, cubists and surrealists. Breathtaking seneries of Zhornava outskirts were depicted by these famous artists.

Tourism in the district is not a new phenomenon — even at the beginning of the 20th century, there were shelters for tourists in the villages of the district, and at the mineral spring resort in Uzhok, two sanatoria with 30 baths, a military hospital and 5 villas with 60 beds functioned actively. During World War I, everything was destroyed. Nowadays, the most famous holiday place in Velykyi Bereznyi district is ski resort Krasiya, located on the slopes of the mountain of the same name in Vyshka village. Some hiking and bicycle routes have been laid in the territory of the district.

An outstanding place of interest in Velykyi Bereznyi district is the railway that was laid through Uzhotskyi pass in 1905-1906 when Transcarpathia was a part of Austria-Hungary. The most complicated area for builders was a distance from the very pass to the village of Volosianka which length was 7,5 km with 362 m level difference. Serpentine roads, bridges, viaducts, tunnels and sustainer walls were built. The majority of these buildings survived two wars, a lot of natural disasters, and they continue functioning to date.

In the territory of the district, a lot of ancient wooden churches were preserved: Natural attractions: Mineral springs:
In the villages of Uzhok, Stuzhytsia, Kostryna, Sil, there are mineral springs as "Naftusia", "Narzan", "Yessentuki".
Reserves, wildlife sanctuaries, parks:

There are more than 250 rare species of trees here, among them – gingko biloba, Canadian hemlock, giant cedar, common and sessile oaks.

It is a growing place of autumn crocus (Colchicum autumnale) — a rare species recorded in the Red Data Book of Ukraine.

Beech forests, mixed with European silver firs, sycamores and ash trees, are aged 70-120. The reserve is located at an altitude of 700-800 metres above sea level. You can encounter the valuable form of a sycamore called "bird's eye" here. In the grass layer, there is a perennial honesty (Lunaria rediviva) and European scopolia (Scopolia carnioilica) — rare plants recorded in the Red Data Book of Ukraine.

Highly productive plantings of scots pines as well as pine-beech, spruce-pine and oak-pine (with northern red oak) cultures are preserved here. The age of the stand of trees is more than 120 years old. This is one of the oldest research areas in the territory of the Ukrainian Carpathians. Trees were planted here back in the 19th century in order to learn the growing process of valuable conifers and hardwood trees of different geographical races in beech forests for the purpose of increasing their productivity and economic-technical value.

Fir-beech virgin forests aged 170-220 mixed with sycamores, elms and ash trees are located at an altitude of 1000-1050 metres above sea level.
Photos 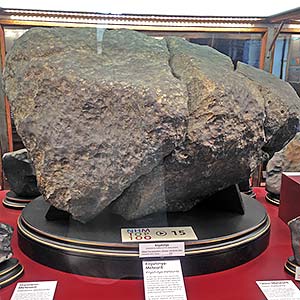 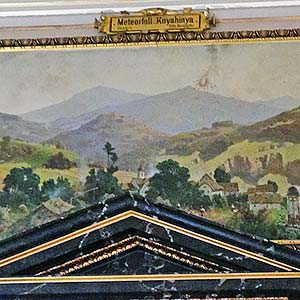 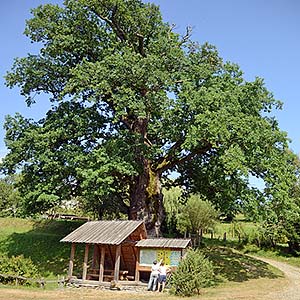 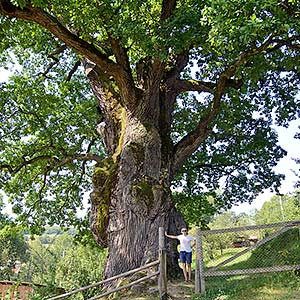