Ski lifts and slopes in Slavske

The ski complex at Trostyan mountain (1232 m high) is located 2 km far from the centre of Slavske village.
There are 8 lifts, one of them is a single chairlift (works also in summer), the others are drag lifts.
Capacity: the chairlift — 400 persons per hour, drag lifts — 200-250 persons.
The complex is divided into 3 sections: the Centre (cairlift, 2 drag lifts), the North (drag lift) and the West (4 drag lifts).

There are 11 slopes (1-2 km length each one), 6 of them meet the international ski competition rules. The most popular slopes are in the West section, where you can ski or snowboard on the intermadiate level trails. The black trails (advanced) are located on the upper and the central northern parts of Trostyan mountain, the easier trails (blue ones) are on the lower part of the mountain. On the lower trails you can learn skiing, Lower West lift is the best for this purpose.

At the foot of Trostyan, near the lower stations and on the top of the mountain there are kolybas (local restaurants) and food booths, where you can have a rest and homemade meals and hot drinks (herbal tea, glіntveyn, etc.). The snowcat functions there.
You can get to the mountain by own car, but it's better to take GAZ-66 or UAZ, which are available for hire at the railway station (10-15 min ride to the chairlift, 20 min — to the lower station of the Central one). Ski equipment is available for hire there.

Conventional signs
In the summer:
The chairlift functions.
Rate — 200 UAH.
Working hours: Saturday-Sunday.
There are cafes and food booths with local food and drinks near the upper station. Horseback riding and quad bike riding is available.
Photos:

On Pohar mountain (857 m high) there is a doble chairlift, a drag lift (doesn't work for several last seasons) and 2 rope tows (one of them doesn't belong to the complex). The lower lift stations are located not far from each other.
On the southern side of the hill there are quite steep red trails for non-professional skiers and snowboarders but they can be interesting for professionals also. The longest slope has 1460 m length, the width — 30-80 m (typicall European slopes of intermadiate level).
There is an interesting, varied slope from the upper station of the chairlift has difference between the upper and the lower parts of the hill — the upper part is flat and easy and there are lots of stone ledges; the lower part is more difficult and steep. The average angle is 25°.
The slope near the drag lift is quite steep, hilly and grassy.
Attention! The drag lift works not always.

Rope tows are located at the foot of the hill, between the bigger lifts. The slopes there would be convenient for beginners.

The snowcat functions there; there are snowmaking machines and night illumination. There is a trail for snowtubing near the drag lift.

At the foot of Pohar mountain there are several ski equipment rental agencies (average rate — 80 UAH); instructor's service is available. You can have a homemade meal there. There are lots of private lodges for tourists (100 m far from the chairlift).

You can get to the complex by public transport (to the railway station and then take a taxi) or by car. Pohar is located on the left from the entrance to the village, opposite Perlyna Karpat hotel (The Pearl of the Carpathians). 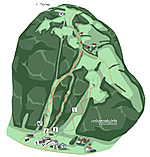 The ski lifts at KREMIN mountain

Kremin mountain is well-known among the beginner skiers. It is located at the entrance to Slavske village (on the right, opposite the filling station), a little more then 1 km far from the railway station in the village.

2 drag lifts are available there in winter. The shorter one is called Politekhnik (belongs to Lviv Polytechnic National University; capacity — 230 persons per hour), the longer one — FMI (abbreviation from Ukrainian Physico-Mechanical Institute; capacity — 400 persons per hour). The lower lift stations are located near each other. The upper station of FMI lift is higher from the upper of Politekhnik.

There are several slopes on the hill. The width is 200 m, the length — 1 km. The easiest one is located near Politekhnik. When learnin how to ski, it's better to ascend not higher the middle of the slope — there is the flattest part. The upper part of this slope is steeper and more hilly. Passing the most difficult part of the slope, you can go down the other way — there is flat and easy slope on the right. It's convenient to sledge there.

Ascending by FMI lift, you can go down quite easily to the upper station of Politekhnik — this part of the hill is the flattest and the most picturesque. From here you can get to the slope of Politekhnik or go parallel along more difficult in the upper part slope.

At the foot of the hill there is a ski equipment rental agency, WC and a cashier's office. On the hill, along the slopes, there are food booths, tables and benches. Barbecue, hot meals and drinks are available.

To get there, go to Slavske by public transport, then go on foot (about 20 min) or take a taxi to Kremin mountain. By all-wheel drive vehicle it is possible to get to the upper stations of the lifts.

The drag lift is located near Terem Hotel in Slavske village, on the road to Volosyanka (Slavske) village. Capacity — 250 persons per hour. There is also an inactive ski lift nearby.

The slope there is quite flat but there are some steep parts. The trails are red combined with blue and would be convenient for amateurs. There are lower parts of the hill which would be good for learning how to ski. The upper part of the hill is quite easy and flat. In the lower part you can go down by 3 different trails. One of them (the right one) goes across the tree area and has a sharp turning, the middle one is straight and quite steep and the left one is a little flatter. Generally, the slope is quite gradual and hilly in some parts. Its surface is grassy in most parts.

At the lower station there is a cafe and a cashier's point. There is an equipment rental agency in Terem Hotel. Instructor's service is available; the snowcat functions there.

To get to the ski lift, take a taxi (GAZ-66 or UAZ) near the railway station in the village (about 15 min ride). If you go by car, follow M. Ustyianovych St. 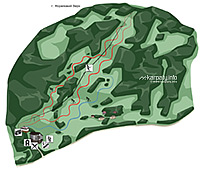 The private ski lift called Warsaw is a platter drag lift. You can see its painted in orange constructions from far distance. The lift is in good technical condition, its capacity is 500 persons per hour.

The slope is quite interesting for skiers and is really long — about 2 km. In addition to this, it's has some bends which makes it more attractive for ski lovers. In the lower part of the hill there are several variants of going down — from the both sides of the ski lift. The slope is intended as for amateurs so for professional skiers (red trails). Near the lower station of the lift there is an area for beginners — the slope there is flat and easy. The hill covering is rocky and grassy.

The other trail goes through the trees, into the forest; it's interesting but a little extreme.

At the lower station there are all the facilities for skiers — an equipment shop and rental agency, a cafe, tables with benches, WC and a cashier's office. The snowcat functions there.

To get to the ski lift, you can go by own car (pay attention — the way up is very steep there) or by taxi (about 100 UAH). The main landmark is the turning near Perlyna Karpat hotel (The Pearl of the Carpathians). The road goes along the ski lifts at Kremin mountain. 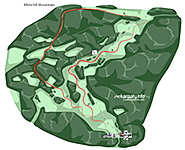 There is also another popular among the skiers slope called Hrabovets, which is located near the same name village at Menchil mountain.


You can go from the top of Menchil mountain (Warsaw ski lift) to Trostyan mountain, in particular to Dynamo-Trostyan ski resort.

From the other side of the top of Menchil mountain there is an inactive drag lift, the slope there is covered with grass and bushes.


In the neighboring village called Volosyanka there are also several ski lifts.