Description:
The exposition was opened in May 2016 as a part of a project 'Tourism Development with Transborder Partnership' co-funded by the European Union. It was placed in the tower of Zhovkva council. 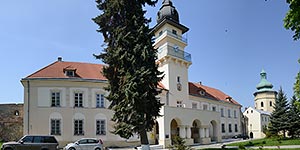 The core of the exhibition consists of antiquities from around Zhovkva collected by the workers of public utility company 'Tourist Information Centre' in Zhovkva town, a lot of exhibits were also donated by Zhovkva inhabitants. Besides that, a part of the collection was bought at the EU expense.
The exposition, divided into several sections, presents different periods of Zhovkva history, from the foundation to the modern times.
The first section shows you pre-war Zhovkva — a multinational town where Ukrainians, Poles and Jews lived together in peace. You can find out there about everyday lives of people that time, about cultural life of local Jewish community, Ukrainian national movement (famous Basilian printing house in particular) and Polish lancers based in the town.

The second section represents war periods in Zhovkva together with consequences the town experienced afterwards. The items there introduce to you WWI times and P. Nesterov (a famous Russian pilot), Ukrainian liberation movement and Sitch Riflemen (one of the first regular military units of Ukrainian army), Soviet and German occupation, about the role of the town in military operations in 1941 and 1944, Soviet veterans, OUN (Organization of Ukrainian Nationalists) and UPA (Ukrainian Insurgent Army) struggle.
In the next part you can take a look at the Soviet times — post-war repressions, the ideology, and the everyday life of ordinary people tyring to get along with those harsh times keeping the faith.
The last section is dedicated to the Anti-Terrorist Operation in the east of Ukraine, emphasizing that the liberation movement is still continuing, so the modern events are as important as everything that had been going on previously on this land. The exposition is being constantly renewed and updated.
There's a sightseeing platform from where you can enjoy a great view of the central square of the town.
You enter the museum from the first floor in Zhovkva council; there are signs in the building.