The district combines three landscape zones: plain, foothill and mountainous. As a result of such a combination, you can admire wonderful sceneries while driving from Івано-Франківська. The highest peak is Mount Syvulia (1836 m). The total area of forests occupies more than a half of the district.

The district centre is the urban-type settlement of Bohorodchany — located on the bank of the Bystrytsia of Solotvyn mountain river. The first written account about it was found in 1441.

The urban-type settlement of Solotvyn that was named Krasnopil in the Galician–Volhynian Chronicle (XI cent.) belongs to the most ancient settlements of the district. The development of salt industry in XVI cent. soon became the reason for changing the name of the inhabited locality.

The ancient mountain village of Стара Гута is 'famous' for having been the location of President Leonid Kuchma's dacha (summer cottage).

The village of Starunia impresses tourists with its natural phenomena. Near this village, in the place of old ozokerite industry, there is a small 1,5 km2 area. This place is of high seismic sensitivity that manifests itself in the appearance of cracks and precipices, growth of rapids and small waterfalls, in the mud volcanism, active dynamics of gas-emission and also in the uneven rise — about 1 m in seven years. More than 300 permanent and temporary springs of fresh and mineralized water, connected with fracture violations, crop out to the surface. Wonder-Starunia responds to earthquakes that occur within a radius of 3-6 thousand km in Romania, Italy, Germany, Iraq, in the Caucasus and even in Soviet Central Asia.

Also in Starunia, the remains of a mammoth and a woolly rhinoceros were found in the old ozokerite mines at the beginning of the 20th century. Now these remains are exhibited in one of Krakow museums.

Tourist infrastructure of the district is poorly developed: there are some hotels and restaurants, a small ski lift for beginners and some manor houses for green tourism, mainly in the villages of Гута та Стара Гута.

The village of Стара Гута is a poit convenient for the beginning of hikings in the mountains. All the routes are marked, they start from the stop in the village (near the school) and lead to the Gorgany mountain range. 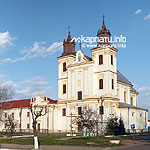 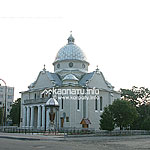 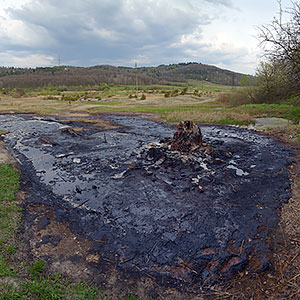 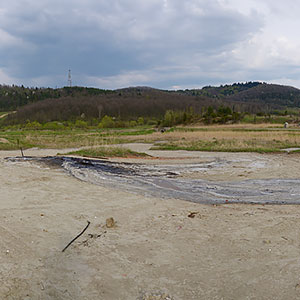