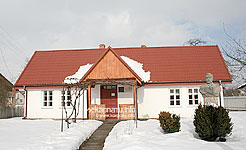 Osyp Makovey — the poet, writer, satirist and writer of political essays, teacher and public figure, was born in Yavoriv in 1867, August 23.

The museum is located in the house where the writer was born. The museum exposition is displayed in three halls. Two former living rooms house personal things of Makovey family — furniture, dinnerware, various toys, embroidered shirts and blouses. There are also photos, letters, books and portraits of Osyp Makovey and his friends. On the inner porch there are kitchen utensils and things of everyday life.

O. Makovey studied at Lviv high school and later — at Lviv university. He began to work during his student's years — he translated different documents and wrote articles for various magazines.

In 1894-95 he was an editor of Zorya magazine, later — of Bukovyna newspaper. Since 1899 O. Makovey worked as a teacher at the teacher's seminary in Chernivtsi. In 1901 he got a doctor's degree on philosophy for the research work about P. Kulish creative work. During the I World War he served at the Austrian army as an interpreter. After the war O. Makovey was the manager of the teacher's seminary in Zalishchyky.

The writer also studied the creative work of I. Franko, Lesia Ukrainka, P. Hrabovsky and others. His pen names are Spectator, О. Stepanovych.

Теl.: +38 (03259) 2-17-55
How to get
By public transport
From Lviv city (Yanivsky tsvyntar bus stop) go by any bus of Novoyavorivsk or Yavoriv directions (they set off every 20-30 minutes).
Detailed information about public transport.