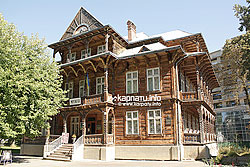 The museum was opened in 1992 in the central part of Truskavets in M. Bilas's lifetime. The museum exposition occupies one of the most beautiful houses of the XIX c. — the former villa "Hoplyana".


Mychaylo Bilas is a widely known artist all over the world. He is a very productive and many-sided artist. He is a master of textile plastic art, bright toys and decorative flowers. He is also considered to be a connoisseur of colours, "a composer of colours".

In his creative work he combines a weaver, a painter, a graphic artist, a folk and embroidery master.

He created about 400 masterpieces, each of them is unique.

M. Bilas, a great modern artist, was born in Krehovychi village of Ivano-Frankivsk region in 1924, August 1. Later, he studied in the Drohobych high school and in the choreographic studio. He had a good voice, so studied in the class of singing, too. At the age of 29 he was a student of art textile department of Lviv Art academy. In 1959 he graduated from the academy owing already the title of People's Artist of Ukraine.

The visitors saw M. Bilas's masterpieces for the first time at the International Art Exhibition in Deli in 1960. In a year his personal exhibitions took place in Poland, Bolgaria, Canada, France, Germany, Romania. Later, his exhibitions were held in many cities of Ukraine.

By car
Go along the road Kyiv-Lviv-Chop to Pisochne village, at the traffic lights turn to the road Pisochne-Boryslav and go to Truskavets town. The museum is situated in the city centre.
GPS:
49.27985  23.50386
convert to dd°mm'ss"
49°16'47.5"  23°30'13.9"
convert to decimal degrees (dd.xxxxx)
navigate
Health resorts
Hotels
B&B
Restaurants, cafés
Museums
Transport
Tourist Information